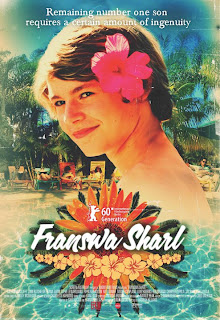 The Accelerator program also features two MIFF screenings, in which the short films of the current crop of Accelerator participants are screened to an appreciative audience composed of cast and crew members, industry peers, and the general public.

These screenings are always one of my personal highlights at MIFF, providing an insight into the current state of play of the industry and a look at the early works of (theoretically) notable filmmakers of the future. Unfortunately I only made it to one Accelerator screening this year, but it was definitely a rewarding experience.

A haunting period piece written, directed and produced by VCA student Asuka Sylvie, and focussing on Lloyd, a young boy suffering from a mysterious ailment whose family have shipped him off to a remote medical facility (Barwon Park, an imposing, 42-room bluestone mansion near Winchelsea that was completed in 1871 and is managed by the National Trust). The existence of a graveyard on the house’s grounds suggests that not all the patients admitted to the clinic leave. This short drama’s gothic tone and mysterious storyline were unfortunately undercut by a title and script which telegraphed the mystery far too soon, and by some poor CGI at the conclusion.

THE MYSTERY OF FLYING KICKS

Director Matthew Bate’s cut and paste style-documentary about the tantalising presence of sneakers hanging from the powerlines of seemingly every major city in the world, crowd-sourced its content to great effect. Interviews and footage provided by contributors from around the globe combined in a witty collage of words and images that posed questions about art, culture, crime and philosophy. Visually and aurally striking, and extremely entertaining: a well-deserved winner of the festival’s award for Best Documentary Short Film.

From screenplay writer and director Irina Goundortseva comes this wordless, bittersweet comedy about an overweight lift attendant looking for companionship in all the wrong places. Though charming, the brief story doesn’t really go anywhere: it feels more like an opening chapter in a larger story rather than a self-contained piece of cinema. Nonetheless, the luminous cinematography and stylish direction ensured that I enjoyed the ride.

If Robert Altman were to shoot a film based on the real life shooting of a bottle shop attendant in Manurewa, one of the southernmost suburbs of Auckland, New Zealand, it probably wouldn’t be too far removed from this short, tense drama by director Sam Peacocke. As the film unfolds we are introduced to a diverse cast of characters, including a young mother worshipping at a Sikh temple, whose husband is one of two Indian brothers working in Manurewa’s bottle shop; a Maori teenager, his violent older brother and his brother’s friends; two ambos; two police officers; and a group of bored young Maori women. Over 19 minutes their paths slowly cross, to shocking effect. While not especially original, there is real power to this film, thanks in part to its superb cinematography, naturalistic performances, taut editing and accomplished direction.

OUT IN THAT DEEP BLUE SEA

This short drama by Canadian writer/director Kazik Radwanski is a claustrophobic, composite look at the malcontented life of a middle-aged real estate agent. Extreme close ups give a sense of the choking mundanity of the subject’s life, but isolation and despair are not enough to make a memorable film, and despite its technical prowess, Out in the Deep Blue Sea left me largely unengaged.

My favourite film of this package, writer/director Hannah Hilliard’s colourful coming of age story generated real and remarkable tension in telling the story of 12 year old Greg Logan’s (Callan McAuliffe) struggle to win his overly competitive father’s affection and support. Set on a family holiday in Fiji in 1980, this witty ‘coming out’ drama won the MIFF’s Erwin Rado Award for Best Australian Short Film, and deservedly so. Rarely has drag ever been as entertaining!

The final film of this first Accelerator package was former VCA student Ariel Kleiman’s Russian submarine drama, Deeper Than Yesterday, which has already screened at Cannes this year as well as been nominated for an AFI award; so it was eagerly anticipated by many in the audience – though apparently not whoever was looking after the house lights, which were briefly turned on – and thankfully off again – before the film started.

Filmed on and in a privately owned, decommissioned submarine docked near Hastings VIC, the film focuses on a group of Russian submariners who have been submerged for three months, and whose sanity and humanity is slowly ebbing away. Its combination of claustrophobia, violence and misogyny made for uncomfortable viewing, but despite its technical prowess, dramatically I found the film less than compelling – an impression compounded by continuity errors which saw the deck of the submarine bone dry in a scene set only moments after it had supposedly resurfaced.

Posted by richardwatts at 1:26 pm